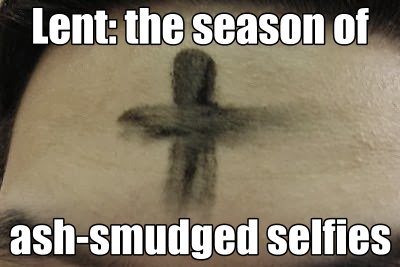 The irony of the ash-smudged selfie.

This year it seems to have reached the tipping point.  More and more of my friends are posting about Lent on social media.  Ash-smudged selfies popped up nearly every time I refreshed my feeds yesterday.  People are sharing with the world what they are giving up for Lent.  And few of them are Catholic or even Anglican in their beliefs.  Even those within the Reformed tradition are getting involved, sometimes explicitly, sometimes in the form of a project like Tim Challies’ “31 Days of Purity“.

I must be living in the proverbial cave, since I can’t seem to figure out why this kind of thing is becoming popular.  Is it the pendulum swing away from the so-called YRR movement by those who are tired of doctrine and want a religious experience instead? Is it the trajectory of people who were “reformed” because it was popular and liked the traditional, creedal feel of the movement and so have carried it farther to include Catholic traditions? Is it a spinoff of the “redeeming the culture” people who are now “redeeming the Traditions” – reading new biblical meaning into old Church rituals?

I don’t know how this came to be a trend, but I am concerned about its ultimate impact. Spurgeon would be concerned too.  Here’s what he said about this sort of thing in 1862:

I shall not detain you longer upon this point when I have said another word. Though this is a Protestant land it is beyond all question that there are some Popish enough to perform great religious acts by way of merit! What a goodly row of almshouses was erected by that miserly old grinder of the poor as an atonement for his hoarding propensities! What a splendid donation to that hospital! A very proper thing, indeed , but the person who left it never gave a farthing to a beggar in his life! And he would not have given it now, only he could not take it with him, and so he has left it as an atonement for sin! Sometimes persons think that the doing of some outrageous religious act will take them to Heaven; frequenting Church prayers twice a day, fasting during Lent, decorating the altar with needlework, putting stained glass in the window, giving a new organ or such like. At the suggestion of their priest they do many such things, and thus they go on working like blind asses at a mill, from morning to night, and make as much real progress. Do I address any such persons here? I do not find fault with you for what you do, but I do find fault with you for why you are doing it! If you dream that you are saving yourselves, remember that your acts are selfish acts, and that there is nothing good in them. They may be good things in themselves, but as they are done not unto God, but evidently with a view to your own welfare, they are done to yourselves, and He will not, therefore, accept them. Let there be never such splendid deeds of alms- giving, never such marvelous mortifications of the flesh, never such devout attendance at daily prayer—they avail nothing before God—when they proceed from a self-righteous heart. Away with them! Away with them all! They are dross and dung before the Most High, if you bring them to Him with a view of purchasing salvation. No, you must have done with these, and trust in Jesus only. When a man can say, “I am saved. Christ is mine”—then he can serve God acceptably, and his deeds shall be received through Christ Jesus.[1]

Ritual is the Real Issue

I understand that the point of Lent is to give a structured opportunity to focus on eliminating distractions and focusing on God, but my concern is that it tends toward ritual and then works righteousness.  Though my Protestant friends would vehemently argue that they are not performing the rituals of Lent for merit, they are but one small step away.  The danger is that the next counter-reformation will be one that emphasizes form over substance and ritual over truth.

Similar to the use of images in worship, at first ritual might be considered an aid to proper focus in worship, but eventually it becomes idolatry, a replacement for true worship. Any act of worship can become a dead work, to be sure. The difference is that God prescribed certain elements of worship; rituals like those observed during Lent are man-made traditions.  They distract from what God prescribed. If it were just a personal time of prayer and repentance, that falls within God’s prescribed worship. But when you build a ritual out of it you’re already taking it one step away from a matter that is between you and God. That’s why Jesus said not to fast publicly:

And when you fast, don’t make it obvious, as the hypocrites do, for they try to look miserable and disheveled so people will admire them for their fasting. I tell you the truth, that is the only reward they will ever get. (Matthew 6:16 NLT)

Rituals create a subtle shift in emphasis from God to man. It seems to me that rituals are created in the first place because of their psychological effect. People feel good about doing rituals. We feel like we are focusing more on God. And it actually seems to help at first; then it becomes all about the experience.  That’s why very similar rites exist in almost every pagan religion. Ritual is by (human) nature self-centered.

I’m not judging anyone’s motives for observing Lent.  I appreciate those who put the emphasis on the heart.  I also believe the ritual of Lent is dangerous and unnecessary.

Ian Columba is an author and chief editor at Theographa Publications. He desires to be an "empathetic apologist"—someone who tries to understand worldviews and find windows through which to shine the light of the gospel. He loves to study the Bible so that he can encourage others and edify the church through digital publications. 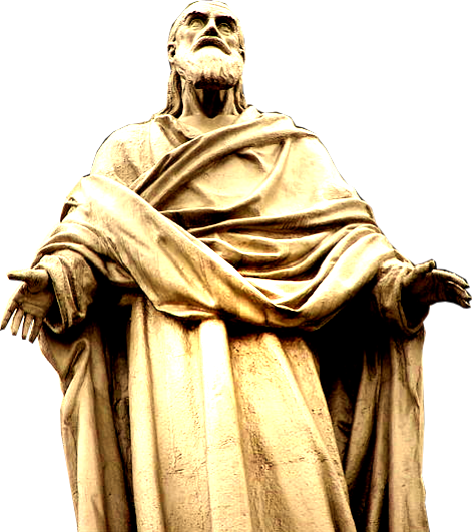 The Martyrdom of Polycarp