Who Were the “Sons of God” in Genesis 6? 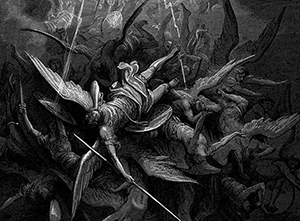 Detail from an illustration by Gustave Doré for John Milton’s Paradise Lost.

Possibly the most difficult to understand passage in the Old Testament is the story of the sons of God found in Genesis 6:1-4.

When man began to multiply on the face of the land and daughters were born to them, the sons of God saw that the daughters of man were attractive. And they took as their wives any they chose. Then the Lord said, ‘My Spirit shall not abide in man forever, for he is flesh: his days shall be 120 years.’  The Nephilim were on the earth in those days, and also afterward, when the sons of God came in to the daughters of man and they bore children to them. These were the mighty men who were of old, the men of renown.

Immediately, questions arise in the readers mind.  Most importantly, we ask “Who were the “sons of God?” There are four basic views concerning their identity.  These hold that the sons of God are:  (1) angels or demons, (2) human rulers, (3) “godly sons” descended from Seth, or (4) lesser gods in pagan Canaanite mythology.   Let’s look at each of these views in greater detail.

The traditional interpretation of this passage holds that the “sons of God” were angels or demons.  According to this view, these angelic beings “defied God by moving outside their appointed realm and marrying (molesting?) human ‘daughters’” (Matthews, 325).  This interpretation was taken by the translators of the Septuagint, who translated the phrase “sons of God” as “angelos tou theou” or “angels of God.”  This view was also held by the Jewish historians Josephus Philo, and Eusebius, as well as by many of the Ante-Nicene church fathers including Justin Martyr, Clement of Alexandria, Origen, Tertullian, Irenaeus, Athenagoras and Commodianus (Huie, 1).  It seems that this idea was taken as common knowledge during Old and New Testament times, and mythology also refers to such an event.  In addition, in at least three separate pseudepigraphical writings there are specific references to angels interbreeding with human women (Book of Enoch 6:1, Jubilees 5:1, Genesis Apocryphon).  Further, there is Scriptural support cited in favor of this position.  Several Old Testament references refer to the angels as “sons of God,” including Job 1:6; 2:1; 38:7; and Psalms 29:1; 82:6; 89:7.  Even more striking is Jude 6-7 which seems to refer directly to this incident:

And the angels who did not stay within their own position of authority, but left their proper dwelling, he has kept in eternal chains under gloomy darkness until the judgment of the great day— just as Sodom and Gomorrah and the surrounding cities, which likewise indulged in sexual immorality and pursued unnatural desire, serve as an example by undergoing a punishment of eternal fire.

There is, however, a difficulty involved in interpreting this passage as well. It is not completely clear whether “themselves” refers to the angels giving themselves over to fornication or to the cities.  The former reading certainly adds weight to the angelic view.  Interestingly, these verses have close parallels in the Book of Enoch (1 Enoch 12:4; 10:4, 6), and Jude 14-15 quotes directly from 1 Enoch 60:8 (Hamilton, 272).

There are many problems with this view, however.  Jesus said in Matthew 22:30, “In the resurrection they neither marry, nor are given in marriage, but are as the angels of God in heaven,” which seems to imply that angels cannot or at least do not procreate.  Another problem arises from the context of the passage.  God is judging humanity not angels for their sinfulness.  The condition of humanity was not because they were the victims of demonic molestation.   Also, demons are never referred to in Scripture as “sons of God,” and it seems unlikely that God’s angels would be involved in such activity.  Further, this view is accommodating to superstitious beliefs in which an incubus impregnates unsuspecting women.

An alternative interpretation holds that the “sons of God” were an early royal aristocracy in the line of Lamech (Hamilton, 263).   According to those who take this position, this was an early class of despotic rulers who followed in the footsteps of Lamech’s polygamy, fathering the “Nephilim” and the “mighty men.”  This was a view of many early rabbis.  Support for this idea comes basically from external Ugaritic sources in which rulers are referred to as “sons of God.”  Additionally,  the Hebrew word elohim used here in the expression “the sons of God” (bene ha elohim) is used in several places in the Old Testament to refer to human judges.  However, there is no indication in Genesis 6 of kingship.

Perhaps the most widely held view today is that the “sons of God,” were those in the righteous line of Seth who intermarried with the Cainite daughters.  This interpretation was first suggested by Julius Africanus and adopted by Augustine in the City of God.  Later it was held by Reformers such as Luther and Calvin.  According to its proponents, the term “sons of God” “may be rendered as a genitive of quality meaning ‘godly sons,’ referring to the heritage of the Sethites” (Matthews, 330).   Also, Israelites are referred to as the “sons of God” in some Old Testament passages, as are believers frequently in the New Testament.  Critics of this view point out that “daughters of men” cannot be limited to Cainites.  In response, it may be said, that their sin lay in the fact that they took wives “of all which they chose,” including Cainites. The children of Seth found the Cainite women to be attractive, and they chose them with lust as their basis.  They failed to keep themselves separate and intermarried with the ungodly Cainites in an unequal yoke.

A few liberal scholars interpret this passage a fourth way, attributing the story to mythology.  Various accounts in other cultures’ mythologies contain parallels to this story.  Canaanite mythology tells of a race of giants that resulted from the intermarriage of humans and gods.  Ancient Greek mythology speaks of Titans, who were the offspring of Uranus (heaven) and Gaea (earth).  The Titans fought against Zeus and lost and were imprisoned in Tartarus (Huie, 5).  Interestingly, Tartarus is the word used for hell in 2 Peter 2:4: “God spared not the angels that sinned, but cast them down to hell (tartarosa) and delivered them into chains of darkness, to be reserved unto judgment.”  Portions of the epic of Gilgamesh also seem to mirror the Genesis narrative.  As a result, liberal theologians claim that the Genesis 6 account is merely a fragment of mythology imported into the Scriptures to make a theological point.

It is impossible and unnecessary to be dogmatic about the interpretation of Genesis 6:1-4.  All of the opinions discussed, with the exception of the last, are valid, reasonable attempts to reconcile the difficulties within the passage.  In my opinion, the weight of evidence leans toward the first “angelic” explanation, since that was widely considered to be factual by Hebrew historians, outside mythological sources, church fathers, and even—it would seem – New Testament authors. 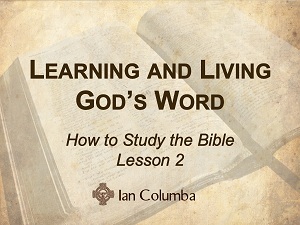 The Role of Reason in Understanding Scripture

What Happens at the Judgment Seat of Christ? 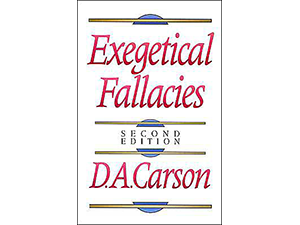